Your Creativity Can Change the World

Fred Barley was a driven, intelligent 19-year-old. He was also homeless. When the police found him living in a tent on the campus of Gordon College in Georgia, he explained he had traveled six hours by bicycle in 100-degree weather to attend his second year of college. He was two weeks early, hoping to get a job before the school year began.

Touched by his desire to succeed, the officers put him up in a motel room and word quickly spread throughout the community. A local pizzeria gave him a job washing dishes, the motel owner allowed him to stay until school started, and a GoFundMe donation page raised over $180,000 to help.

When we think creatively about giving – big things can happen. You can donate time, energy, unwanted food, clothing, blood, and of course, money. But even cash gifts don’t have to come from just what’s in your pocket. Have you ever considered gifts of appreciated stock? Here are three tax-smart ways to give them:

Your impact doesn’t have to be limited to your wallet or even your time on earth. Exercise creative giving that lasts. As Hebrews says,

“…Do not forget to do good and to share with others, for with such sacrifices God is pleased.”

About the Author: Leah Hankins 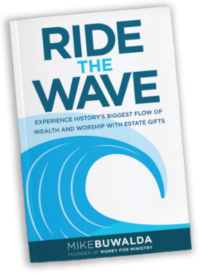 Want to know how we get these numbers?